I live in a small town in Serbia and I’ve been teaching English as a foreign language to young learners for more than ten years. I still teach in the same school where I first got the job, in a village near my hometown. Even though teaching children is full of surprises and no two days are ever the same, after a couple of years I started wondering if there was more to teaching than that. Around that time a colleague asked me if I wanted to go to a conference in Belgrade. I went, and a whole new world of knowledge opened in front of me. Since then, my life as a teacher has never been the same.

That first conference I went to triggered some kind of addiction in me and I soon started to look for more and more events like that. Most of my colleagues at school were not involved in any kind of professional development and that’s why whenever I attended a PD event I had the feeling of being among friends, a feeling of understanding and not standing out. In the meantime, I discovered ELTA (English Language Teachers’ Association of Serbia) and became a member. At the following year’s conference, simply out of curiosity, I decided to attend the ELTA AGM (Annual General Meeting) held by the ELTA Board. I was really wondering who all those important people were. I was wondering who was behind all these conferences and PD seminars I’ve been attending so far. To my surprise, I found out that they all were “just” teachers, teachers like you and me.

My journey through PD continued at the same pace and a couple of years later, during the AGM at the conference, ELTA Board announced that they were looking for Regional coordinator for Srem region (the part of Serbia where I live). There were a lot of people attending the meeting but nobody volunteered. Even though hardly anybody knew me, I slowly started to feel as if all the eyes were looking towards me. My hand went up. That’s how in 2012, six years after entering the classroom for the first time, I became ELTA Regional coordinator, responsible for organising TD events and sharing information about ELTA throughout the region.

From 2006 to 2012 I attended numerous teacher development seminars, webinars, workshops, summer schools and conferences. At that point I mostly saw professional development events as a chance to learn from, listen to and meet native speakers. Even when the topics were not that interesting I would still go and attend a workshop or a talk held by a native speaker. Then, at 2013 ELTA Conference it happened that an afternoon slot was shared mostly by Serbian presenters. Most of them I knew from PD events I had attended throughout the years and many of them were my social media friends. I felt I should go. Attending that workshop made me realise that my very own fellow colleagues had something very important to say. I realised that their perspective was more realistic and closer to my heart as we share the same teaching conditions and similar surroundings. It also made me think about my own teaching experience and ideas from a different perspective.

I soon started working on my first presentation and when I was done, I thought “Now, what?” Not long after that I saw that ELTA was looking for an official representative to give a presentation at 2014 TESOL Macedonia-Thrace Annual Convention. I applied, thinking “No way they will choose me, I’ve never presented before!” but when I received the confirmation email I was overwhelmed with joy, enthusiasm and fear at the same time. The room was full and the audience was supportive. Not knowing that it was just the beginning, I thought it was the best experience I could ever have. I met so many great colleagues with whom I’m still in touch.

After that, my PLN (Professional Learning Network) started to grow, I presented at several conferences both in Serbia and the region, won a scholarship from the American Embassy in Belgrade for a ten-week online PD (professional development) course, completed a Trainer Development Course at British Council Serbia and continued my voluntary work as a regional coordinator. Then in March 2015, when I thought things couldn’t get any better, an email came from ELTA office saying that I was recommended for a position as an ELTA Serbia Board Member. Once I had wondered who they were and I never thought that I could, and would, become one of them. It was an honour and a huge step in my professional life. ELTA officially became my second family. 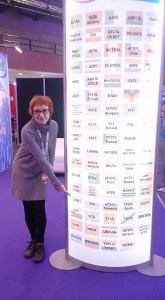 In 2016 I became an IATEFL member and I was lucky enough to attend the 50th IATEFL Conference in Birmingham as the ELTA Serbia Associates Representative. I had never attended an event of such size and significance before and I didn’t know what to expect. When I got there, I was overwhelmed and I felt like a child in Disneyland. It was the experience of a lifetime. There were a lot of teachers whom I had met at conferences before and it was a great chance to catch up with them. I also had the opportunity to meet in person many colleagues with whom I was in touch through social media. I made new friends and my PLN grew even more. For me, the conference in Birmingham was all about people. It was so welcoming and I had the impression that I became part of a huge ELT family.

Later that year I applied for one of the IATEFL scholarships which included a presentation at the IATEFL Conference in Glasgow. I didn’t win the scholarship but my speaker proposal was accepted and in April 2017 I presented at IATEFL Conference for the first time. Another once in a lifetime experience! Once again it crossed my mind that things can’t get any better.

Since 2015 I’ve been spending most of my time trying to do my best as part of the ELTA Serbia Board (organising the annual conferences and other PD events, organising different competitions for teachers and students, writing projects, co-managing our facebook page and responding to hundreds of emails). Even though at some points it seemed that ELTA could become “a full time job”, I tried not to neglect my own professional development. For the second time I won a scholarship from the American Embassy in Belgrade for an eight-week online course. I applied for the IATEFL Conference in Brighton and my speaker proposal was accepted.

2018 got off to a great start. As a follow up to the conference in Glasgow I was invited by IATEFL to contribute to a webinar Tips for First-Time Presenters at International Conferences, which is available for both IATEFL members and non-members to watch. It was a completely new experience and with 381 people attending the webinar I can say it was a success. Not long after that I received a proposal for giving an informal interview at the Brighton IATEFL Conference as well as an offer to volunteer as an interviewer. I accepted both wholeheartedly even though I had never interviewed anybody before. It was an opportunity not only to learn something new but also to grow my PLN and have fun at the same time. My talk also went well and there’s another webinar on the horizon! 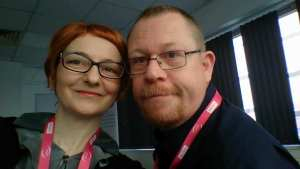 I hope that my further journey through ELT will bring me more “Things can’t get better” moments and more proof that they can.

Fifteen years ago, I didn’t even know that the world of teaching associations existed. Now I can say that TAs change lives. They changed mine, and only in positive ways. So, my advice is: get involved, share what you know and learn from others, do your best and you’ll see that things can always get better! 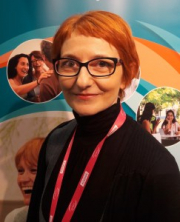 Božica Šarić-Cvjetković has a BA in English language and literature and more than ten years of experience in the classroom. Based in Serbia, she teaches young learners and teenagers in a state primary school and works with students with special learning difficulties. She’s also a teacher trainer and has delivered workshops and talks both locally and internationally.

She currently serves as ELTA Serbia Vice President. In her free time she enjoys reading, gardening and playing with her cats.