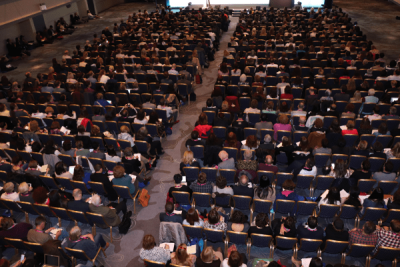 For most members connecting to like-minded professionals and being part of an English teaching community are the two main reasons to join IATEFL. All this is great, and works in a lot of cases. However, meeting new people doesn’t seem to be as easy as it sounds, and many experience problems at professional gatherings because they are lonely and don’t know how to make the first step, because they attend the conference with a colleague and friend and feel safe around them only, or because they are simply a bit clumsy when it comes to social contacts.

It happened again during a conference I’ve been to earlier this year – the room took about thirty people, and five minutes before the start of the next workshop it was half full. I tried to sit on the nearest seat, but the teacher next to it said that she was keeping it for her colleague. Three empty seats in front of it had a cardigan, a jacket and a folder on them, clearly showing that they, too, were occupied. And so it went on and on, until somebody smiled and said, “All right, why don’t you sit here?”, and removed her bag from the seat right next to her. She wasn’t waiting for anybody, but just like an average passenger on a bus or train she wanted to have a bit more space while travelling to new horizons regarding teaching English pronunciation.

We are weird creatures, people, and even though teachers claim to like new faces, when it comes to unfamiliar environments, sticking to what is known still seems more reassuring. This is why coffee breaks can be a challenge too, particularly at smaller conferences organised by national teachers’ associations where a newcomer doesn’t know anybody, and all other participants seem to know each other. I remember a conference where I was standing on my own, a cup of coffee in my hand, for the whole break, unable to find a soul to talk to. My name on the badge was foreign all right, but not foreign in the right way to promise a chat with a native speaker of English, a quick refreshing practice in the language we teach. Sadly, it was still too foreign for the teachers of that country to use their mother tongue to talk to me. As a result, they kept their heads together and chatted in their lingo while I beamed smiles all around and drank my coffee alone.

But I can’t blame it all on colleagues who wanted to have a good natter in their mother tongue that I don’t share. The core of the problem was and has always been in me. When I attended my very first IATEFL conference as a young teacher with one-year experience, I didn’t see myself as some kind of a treasure, a source of information about some potentially exotic teaching situation for the predominantly British IATEFL membership who then attended it. I never thought anybody would be interested to hear about my experience. No, I was shy, and almost felt guilty because I was not a native speaker of English. I knew a few teachers from IH Hastings there, because it was through them that I learnt of IATEFL and became a member, but I was aware that I couldn’t cling to them all through the conference, so I was often on my own. Learning like a sponge during sessions, I didn’t want to admit even to myself how very lonely I felt otherwise.

I came back to more conferences and little by little I started getting to know my IATEFL flock, but it was only after I started volunteering that I waved goodbye to conference loneliness. It wasn’t IATEFL that was responsible for it, the change happened in me. I opened up, and could then approach others.

Shyness and low self-esteem may be the reasons why teachers attend conferences in pairs or groups – deep down they may be afraid of feeling lonely and rejected. Attending big conferences like ours, with 3,000 or more delegates from all around the world, could be rather daunting even though help is everywhere, for example in the form of How to sessions and various evening events. Smaller conferences held locally, on the other hand, should be easier to cope with and organisers and particularly delegates from the host country should not leave anybody feel lonely.

It is true that one of the joys of attending conferences is the prospect of (again) seeing colleagues that may have become friends over the years, or who even met as students. Conferences may offer the only opportunity in the year to meet and catch up. Of course, this pleasant part of our gatherings needs to remain strong and grow, but maybe a little time could also be spent on new faces.

I try to meet at least five new people at every conference. I just start chatting to people who seem lonely during breaks or who sit on their own before the beginning of talks or workshops. “You seem a bit lost,” I said to a young colleague at the Staff Volunteers and Associates’ event in Liverpool earlier this year, and then learned a lot about the situation of English teachers in Iceland and his school. From then we went on and talked about Iceland’s film production, and then to Eyjafjallajökul, the volcano that stopped air traffic back in 2010 by erupting ash. I remember it because it happened right after our Harrogate conference and many delegates couldn’t fly home. 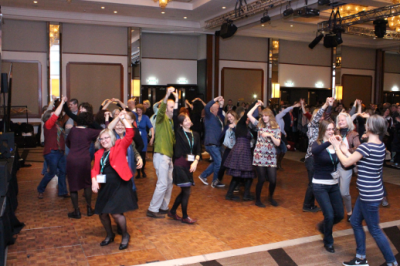 And it was precisely in Harrogate in 2010 that chatting to the colleague sitting next to me at the opening plenary brought me a friend I regularly meet at our conferences and who is not only a lovely person, but also a very good dancer. Without a conscious decision to meet new people, I would not have heard what it is like to teach blind children through story-telling, how it feels to be out of your country and continent for the first time in your life, or how frightening it can be to pass a few bushes on the way to the conference venue if you come from a country where bushes are full of snakes. If I hadn’t started a conversation with an unknown delegate, I would never even think about what it is like to live next door to your school and be constantly observed by your students even during your free time, and I would not have heard the same spring day in Britain described as very nice and warm and as cold and miserable just because the delegates came from Finland and Greece respectively.

Just like EFL teachers often tend to forget what it is like to learn English and only remember how frustrating it is to be limited to 500 words or less when we ourselves make first steps in another foreign language, regular conference-goers have forgotten what it is like not to meet old friends wherever there’s an ELT event. Similarly, first-time attendees often wrongly think they have little to share and only later learn that everybody is equally important in the tapestry we call IATEFL. And yes, it is true that when approached at a conference or a seminar, some people shy away, refuse to talk or politely move away, but more often than not they do engage in conversation that can lead to new and surprising discoveries. 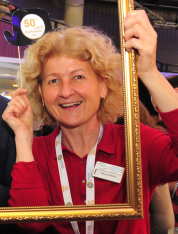 Mojca Belak is Chair of IATEFL Membership and Marketing Committee and a longstanding IATEFL member. She teaches English at the University of Ljubljana in Slovenia, and likes running, trees, the cliffs on the south coast of England and a small tourist resort called Whitstable.