A Lockdown Musical (ELT) Story: collaboration in a time of Covid

Last year, at about this time, when the world started going into ‘lockdowns’, one of our Publications Committee members, Rakesh Bhanot, began to encourage friends and colleagues to write about how they were dealing with their professional English languyage teaching (ELT) duties during the covid pandemic. We had a flurry of activity, and blog posts began to appear (from all parts of the world) on a weekly basis. Unfortunately, Rakesh had to resign from the Pubs Committee a few months later for personal reasons. Recently, Syke, curator of IATEFL’s blog, noticed that epithets such as ‘songwriter’ and ‘lyricist’ began to appear before Rakesh’s name on some social media posts.  So, he decided to investigate, and to interview Rakesh.

Syke:  Rakesh, please tell us what you have been doing since last summer?

Rakesh:  As we both live in the northern hemisphere, I take it you mean last June/July? Well, since I retired from fulltime teaching ‘a long time ago’, I have continued to do some voluntary teaching/training, as well as taking part in some online ELT conferences.

Syke:  Yes, but I have noticed, however, that you are beginning to be described a ‘lyricist’; even a ‘song-writer’. How has this come about?

Rakesh:  This incredible (for me at least) phenomenon is very new, and I still find it embarrassing when someone refers to me as a ‘writer’ – let alone the two terms you just mentioned. Incidentally, I don’t write songs. I just write the lyrics.

Syke:  So, tell us what happened?

Rakesh:  When we had our first lockdown in the UK, like everyone else, I looked around to see what I could do during my free time. I decided to join an online folk club called Lockdown Folk (LF) run twice a week by one Jeremy Harmer. All readers of this blog will know Jeremy, and many of you will also know that, as well as being a prolific author of ELT course books, Mr Harmer is a talented musician and singer-songwriter extraordinaire!

Syke:  Yes, but how did you end up writing lyrics for the songs?

Rakesh:  One evening during the online session, Jeremy (who is a wonderful and eccentric host) said, “so, what are you going to sing, Rakesh”? My nervous, but honest, reply was, “I don’t sing, and I can’t play any instruments. However, if you like, I would be happy to read you a short poem”. Jeremy accepted my offer, and I proceeded to recite my modest ditty written many moons ago. I failed to attend the next LF online meeting but later learnt that SIX of the regular singers from LF had used/adapted the words of my poem to create/compose 6 entirely different songs!

Syke:  Surely, that is not enough to deserve the title of a songwriter; or was it?

Rakesh:  During subsequent meetings, I was invited to recite more of my poems from yesteryear, and several singers adapted some of these and turned them into songs. One member of LF in particular, Pauline Vallance from Scotland, has now collaborated with me to write more than 40 original songs (most available online) since last summer.

Syke: So, I guess that means you are a proper lyricist?

Rakesh:  It’s more of a hobby, and I still don’t think of myself as a ‘lyricist’. Yet, here I am holding a CD in my hands where it says “all lyrics by Rakesh Bhanot”! 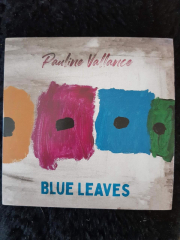 Syke:  Tell me more about this CD.

Rakesh:  Somehow, in spite of various lockdown restrictions, Pauline, the singer/musician, managed to record 10 of our songs (mostly based on old poems of mine) and have them printed/duplicated. The CD was released on 8 March via the usual online platforms for music. It is called Blue Leaves which is one of the songs. Given our current lockdown situation, we had an online launch on 21 March where we all raised a glass or two to celebrate this (international) lockdown collaboration. This would not have happened without the pandemic, and, of course, Jeremy Harmer’s amazing LF initiative. You can see a recording of the ‘launch concert’ on Facebook Live here. Incidentally, 21 March is International Downs Syndrome Day, and it was fitting that the cover of the CD is an image of a painting by my younger brother, Neelum, who has Downs.

Rakesh:  First, people can access the songs via these links on Apple, on Amazon, and on Spotify. Second, if any teachers want copies of the lyrics, they can write to me at [email protected]. Thirdly, I would be happy to share some ideas about using poems/songs in ELT. Finally, you can find more about Pauline and her special (comical) contribution to the world of entertainment on her website: www.paulinevallance.co.uk 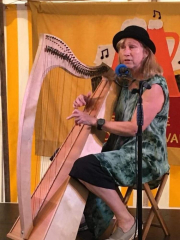 Syke:  Tell us more about the ‘comical contribution to entertainment’, please.

Rakesh:  About a year ago, Pauline started recording well-known songs to the tune of other songs. This is based on a radio comedy programme whereby comedians are invited “to sing one song to the tune of another”, and the results can be hilarious. So far, Pauline has recorded 150 of these (more than anyone else in the world), and they can all be viewed on https://youtube.com/user/paulinevallance. They can make very interesting English lessons because they force you to listen to the lyrics of famous songs in a different light.

Rakesh:  Well, we have enough material for several more. Perhaps when the second or third CD comes out, I will begin to feel comfortable with the title of lyricist (!), but, for the moment, I am happy to be called a former teacher/trainer of English. During the online launch of the CD, some ELT colleagues started referring to me as ‘Rakesh, the bard’! Perhaps they meant ‘barred’?

Syke:  Thank you, Rakesh, and good luck with your new hobby. 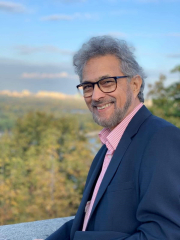 Rakesh Bhanot started teaching English in Spain in 1972, and since then he has been involved in various aspects of ELT (trainer, examiner, author, journal editor, inspector, book reviewer et al) in many parts of the world. He is the Founder Editor of Language Issues – the journal of the National Association for the Teaching of English and other Community Languages to Adults (NATECLA) in the UK. Rakesh likes cooking and writing poetry. During the Covid lockdown period, he has collaborated with several musicians to turn his poems into songs. The CD Blue Leaves is a collaboration with the Scottish singer, Pauline Vallance.