'The greatest changes in my professional life' by Mojca Belak

In his article "30 years in English language teaching" Jon Burton invited the readers of IATEFL Views to share our memories of the greatest changes in our professional lives. Here are some of mine:

One of the most useful practical tips I got as a young teacher was that if you break a new piece of chalk in half, it doesn't make that awful scratching sound on the board. I remembered it for life, but now I don't need that trick any longer. Whiteboards that have replaced green/black boards are less messy, and at the end of a class I am now no longer covered in white powder. The uncomfortable feeling of holding a wet sponge to clean the board is also a thing of the past, as is the smell of a freshly wiped board. However, my handwriting was never very legible, and it looked better when I used chalk because I wrote more slowly than I do now with whiteboard markers.

In the first half of my career, a lesson about various monolingual dictionaries always required careful preparation, and by this I don't mean the lesson plan. My classroom used to be in the basement and my office on the third floor. Getting to and from the classroom was never a problem, I hurried up and down the stairs with a spring in my step, but when I used dictionaries, it meant carrying them to class myself. It meant juggling five bulky books, in addition to the cassette recorder that was always my companion. No wonder I never carried a handbag - my rucksack was so much more useful at times like that.

I still have the first edition of the Collins COBUILD dictionary. It's falling apart now, but I wouldn't part with it even though I no longer use it. It's true that it's less time-consuming to find a word or phrase online but turning those thin dictionary pages was a special treat. Also, the Collins COBUILD dictionary spoke to me because of its entries explained in complete sentences. For the first week or so after I bought it, it was my favourite bedtime reading. It also had another feature that was quite revolutionary in the late eighties - it used they as a singular gender-neutral pronoun. I liked that, both because I heard they used that way by native speakers of English, and because it made many traditional grammarians jump.

Apart from dictionaries, newspapers also brought a very kinaesthetic touch to my teaching. I could only rarely bring to class two different British newspapers published on the same day to compare. The British Council was subscribed to various quality newspapers, but in order to get tabloids, I had to rely on the help of friends who travelled to the UK. As students leafed through the various papers in pairs or groups, there was a lot of rustling, opening and folding of papers and, by the end of the session, inky fingers.

It wasn't just British tabloids that were hard to come by on a regular basis in 1990s Slovenia, this was also true of all listening materials. Apart from what came with course books, a teacher could usually get recordings only as freebies at conferences or simply use songs in English. There was another little detail about using those in class: if I wanted to teach something from them, I had to write down the lyrics myself. That meant that I had to listen to the song over and over again, struggling over the parts that were unclear.

Films and videos used to be another challenge. There was a special procedure if I wanted to use them in class: I had to reserve a TV /video trolley first, and if everything worked out, the maintenance man had wheeled it to the desired classroom just before class. Sometimes the TV trolley didn't find its way to the right classroom, and that meant that I was left without the video support and had to improvise.

The deepest professional change that happened to me over the years, however, was the shift in my attitude towards my English. When I started writing, I used to ask a native speaker to edit every article "to make sure it was all right." I gave that up in the early years of ELF, English as a Lingua Franca. I guess I realised that the time had come to publish my writing in my English, the language I have learned over the years.

And finally, my students also changed during this time. It's no surprise that they did; when I started working at the University of Ljubljana, the young people I taught were less than ten years younger than me, while now I'm older than their parents. As I got older while they have always been between 19 and 23, my view of them and my attitude towards them changed. I evolved from almost being “one of them” to their “school mother”. Some of them may already see me as a granny, but this is a view of myself that I don’t want to think about just yet.

Apart from my relationship with students having evolved, there have also been some changes in their attitudes that reflect broader shifts in society. Two decades ago, a text on Quentin Crisp only received comments about how hard it must be to be different, whereas now, if such a topic is discussed, LGBTQ students often take the lead and address these issues openly by talking about their own experiences.

Over the past three decades, my teaching has become less kinaesthetic, and in this respect less comfortable for me and for the learners who like to experience learning through the senses of touch and smell. It has also transformed in parts because of the changes in me and in society, but in its core it has remained what it has always been for me: that good old dance of give and take. 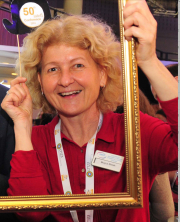 Mojca Belak is a long-standing IATEFL member, Chair of IATEFL Membership Committee and one of the three members of the IATEFL Blog team. She teaches English at the University of Ljubljana in Slovenia. She is also a teacher trainer at Pilgrims, specialising in creativity in language teaching. She likes trees, mountains and running.

If you are a member of IATEFL and would like to contribute to the blog, we’d love to hear from you at [email protected] or [email protected]. We’re looking for stories from our members, news about projects you’ve been involved in, and anything else you think those connected to English language teaching would be interested in reading. We look forward to hearing from you! If you’re not a member, why not join us?