'A few reflections on working with traumatised teachers' by Christopher Graham

In the ELT community, we’ve created a reasonably effective teacher training structure. The CELTA and Trinity certificates are good introductions and set people on the right track for their first years in the classroom, while the DELTA and Trinity Diploma develop this and provide the tools, techniques and confidence to move forwards. Those who, like me, partly or completely leave the classroom to become involved in teacher development, writing or consultancy gain another collection of skills sets. I used to think that after far too many years in ELT, there were not many challenges that I couldn’t somehow cope with. In my teacher development work, I’m used to people resisting: “I can’t have students working in groups; it’s too noisy; we can’t move the desks; I just need to teach them grammar; what about the exams?” I have answers to many of these concerns. My ideas don’t always work, but I hope I can help teachers think their way around the issues.

I was of course completely wrong in thinking that there were not many things I couldn’t cope with, and this came home to me with considerable force when I started working both in teachers’ home countries and elsewhere on projects with teachers from conflict and post-conflict zones, notably Iraq and Libya. I realise how totally unprepared I was to work with people who had experienced the most appalling traumas.

There are many anecdotes and stories that I could tell, but one that sticks in my mind was from a teacher from Anbar province in Iraq. He was clearly a very sensitive guy and came up to me in a coffee break with a copy of his coursebook. It was a standard western-style coursebook, I can’t remember which one it was. It doesn’t matter. He handed me the book and said, “Have a look at my coursebook”. I took it rather arrogantly, thinking, “Yeah, yeah, I know this book” and handed it back to him. I can see his face now, he looked back at me with strong eye contact, though his eyes were somehow dead, somewhere else, “No, really look at it, please”. I looked at it again and noticed how thin it was; something was missing. He took the book back and his eyes locked on mine again as he said, “We have ISIS – I have to tear out all the pages with colour photographs, we had to send all the female students home and all my female colleagues had to leave”. I didn’t know what to say, a visceral moment, a kick in the stomach. It was only a book, but … you’re teachers, you get it. He subsequently went on to tell me other things that had happened to his community that I won’t share in this forum. This incident and several others I’ve experienced recently have made me research and think about working with traumatised teachers.
So let’s think a little about some of the behaviours that I’ve witnessed.

This is particularly a challenge in train-the-trainer courses where feedback skills are discussed. It’s not uncommon to see one teacher totally demolish a lesson that they’ve just observed from one of their colleagues. In short, aggression. This may be amplified by the undertones of sectarianism that are common in conflict zones.
Time for some definitions, and there are lots of definitions of trauma. This one particularly caught my eye because, while it may not be completely scientific and the English is a little bit ‘off’, it seems to tell it like it is:
‘An overwhelming, life-threatening, terrible and frightening experience which is way out from any other “ordinary” human experience.’ (Source: Refugee Trauma Help).

There is a significant body of research on traumatized children and students, but very little on traumatised teachers so my first port of call was MIND (a UK mental health charity) and this is their definition of post traumatic stress disorder:
‘Post-traumatic stress disorder (PTSD) is a type of anxiety disorder which you may develop after being involved in, or witnessing, traumatic events. The condition was first recognised in war veterans and has been known by a variety of names, such as ‘shell shock’. But it’s not only diagnosed in soldiers – a wide range of traumatic experiences can cause PTSD.’ 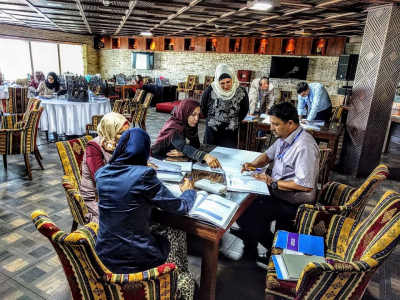 Interestingly, the list of PTSD symptoms that MIND list is very similar to my list of behaviours above, with the addition of susceptibility to physical symptoms such as stomach pains or dizziness. Something I’ve seen very often.

So what techniques or approaches can I, a simple teacher educator and not a psychiatrist or psychologist, do in these circumstances? One option, of course, is nothing – just try to carry on regardless – but that goes against the grain of my approach to my work, which I hope is at least a little bit empathetic.

“The ongoing stress and anxiety distracted an enormous number of teachers and made them unable to cope with their daily life as teachers in addition to the fact that some schools were turned into military barracks by armed groups or by terrorists.”

This article is dedicated to those colleagues who have been lost or have lost. 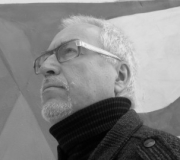 Christopher Graham is Director – Academic and Training at Garnet Publishing but wrote this in a personal capacity. He has many years of experience as a teacher educator, author and consultant and has a special interest in working with teachers in and from fragile environments such as Libya, Iraq and Algeria.