'Diary of a scholarship winner, part 3' by Katy Muench

This is the second of a three-part series by Katy Muench, one of the Glasgow 2017 scholarship winners. In part one, she introduced herself and told you about the process of applying for and getting a scholarship. In part two, she told you about her expectations before this year’s conference, and in this part, she will reflect on her conference experience this year. Over to Katy…

Was it really only last week? I had spent so long building up to the IATEFL conference in Glasgow that it seems strange that it’s now all over. I was a mixture of excited nerves upon arrival in Scotland – although at least my laptop had made it safe and sound (I had to check it in due to new regulations).

My week started with the Global Issues PCE day. I chose to attend this day because the topics of the sessions grabbed me. Furthermore, my session had been chosen to be part of the Global Issues track day on Thursday. The PCE day was an excellent opportunity to connect with other teachers and I found out about some inspiring projects. As there are approximately 3 million refugees in Turkey, where I am based,  I was especially interested to find out about initiatives in language teaching with migrant groups. I’ve brought the knowledge and connections made in Glasgow back with me to Istanbul and I hope to make use of them soon.

I attended scores of talks and workshops, so many that I had to force myself to slow down a bit and take some breaks. The highlight for me was Alastair Roy’s talk on Supporting Introversion in Language Learning. As an introvert myself, I have an interest in this topic from the perspective of student and teacher. The session was very well put together and gave me more ideas to consider. Watching another self-confessed introvert present also gave me confidence for my own workshop.

As my workshop was in the late afternoon on Thursday, I didn’t feel very relaxed until it was over. I am used to speaking in front of people but a combination of my topic choice and not knowing who would turn up left me in a bit of a state. I actually felt physical symptoms of anxiety on Thursday and had to go out for a long walk and some chocolate to calm myself down. Attending a workshop on mindfulness – with some meditation included – helped too. 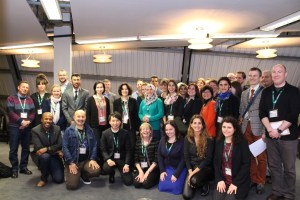 In the end, after all the build up, I was relieved to finally do my workshop. Due to various complications (let’s just say there are some issues with free speech in Turkey and I wasn’t entirely sure who would be attending), I had changed the content of it substantially since I originally sent in my abstract. Despite being initially worried that nobody would turn up, there was a lovely group of people who were willing to interact and take part in the activities I had planned. Several of the attendees came to chat to me at the end of the session and it felt really good that others were interested in the topic and keeping in touch.

I can finally say I have presented at IATEFL and it was a great honour to be there as the winner of a scholarship. Attending the conference allowed me to get lots of new teaching ideas, meet inspiring people and hopefully get involved with some new projects. I’d like to thank the Global Issues SIG, especially Linda Ruas, for the excellent organisation, clear communication and support in the lead up to and throughout the conference.